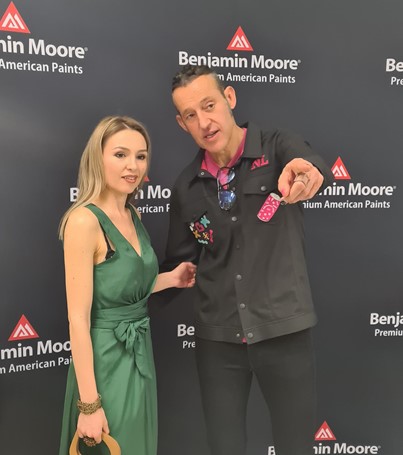 We are delighted to see that the interior design profession is settling in more and more each day in Romania. The creation of RIDA (Romanian Interior Design Association) is a notable milestone in this process and was celebrated last evening through the opening ceremony hosted in the generous spaces of the Bucharest Delta Studio showroom. We salute this initiative and are honored to be a part of this community. 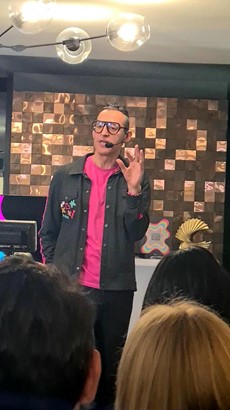 In case you want a glimpse into last nights’ event, just imagine design, spice and everything nice; an immense showroom filled with nice furniture and tiles, fine wine and dine and all the fuss and fuzz built up by having nearly 100 designers gathered in one space. Among which, of course, the one Karim Rashid. We very much enjoyed his speech and felt like sharing some of the ideas he expressed in it.

As he nicely stated, in  the past 20 years, the profession of design evolved and gained an important place in the lives of all people. He underlined the difference between an interior designer and a decorator. The interior designer/ architect goes deep into questioning the why more than the how of things around us; why we use the spaces the way we do, how we sit on a chair, or in a bus station. Only by asking these questions can one start to attend to the need that generates a product or a space. A decorator would not address issues so profoundly, instead they would just make it pretty. And I am not saying this to throw shade or undermine the importance of the latter. However, I believe it is healthy to define and distinguish one from the other.

Furthermore, Mr. Rashid discusses the idea of kitsch vs authenticity. If we can define kitsch as a cheap replica of the original, does that make all the replica furniture we use in our projects kitsch? Does that mean that any time we “steal” an idea, or get inspired by something we create kitsch? Sometimes we may find ourselves taking credit for a great idea of something that has been stored in our visual memory banks from a google search we did three months ago, says Mr. K.

Ultimately, he said the key to creating originality lies in going through the design process thoroughly, starting from the root of observing human behavior- as opposed to acce

pting the paradigm of  we do things this way just because this is how we always have. And in order to be observant we must Be. BE PRESENT. And right he is. As a seeker and a yogi padawan myself I can add that it is not always easy to do so. But it is our duty to t

So thank you @RIDA for bringing

Mr. Karim Rashid to Romania and into this community. May his spark ignite our minds and hearts in creating functional beauty and bettering this world to the best of our abilities.

This website uses cookies to improve your experience while you navigate through the website. Out of these, the cookies that are categorized as necessary are stored on your browser as they are essential for the working of basic functionalities of the website. We also use third-party cookies that help us analyze and understand how you use this website. These cookies will be stored in your browser only with your consent. You also have the option to opt-out of these cookies. But opting out of some of these cookies may affect your browsing experience.
Necessary Întotdeauna activate
Necessary cookies are absolutely essential for the website to function properly. These cookies ensure basic functionalities and security features of the website, anonymously.
Functional
Functional cookies help to perform certain functionalities like sharing the content of the website on social media platforms, collect feedbacks, and other third-party features.
Performance
Performance cookies are used to understand and analyze the key performance indexes of the website which helps in delivering a better user experience for the visitors.
Analytics
Analytical cookies are used to understand how visitors interact with the website. These cookies help provide information on metrics the number of visitors, bounce rate, traffic source, etc.
Advertisement
Advertisement cookies are used to provide visitors with relevant ads and marketing campaigns. These cookies track visitors across websites and collect information to provide customized ads.
Others
Other uncategorized cookies are those that are being analyzed and have not been classified into a category as yet.
SALVEAZĂ ȘI ACCEPTĂ